I am falling slightly behind on the baking challenge – I have actually mostly caught up to my posts and now I just have to press on with the actual baking. However, I have been distracted by watching the actual Great British Bake-Off, series four, and by September, which is a busy month at work and personally (birthday!). It’s good fun, even though I kind of regretted starting this challenge when I saw they had to make filo pastry in this series. It looks so hard to roll it out thinly! Surely making filo at home is only for the slightly mad?

Unlike filo pastry, the Battenberg cake – a Mary Berry recipe and the technical challenge for the first episode, second series of GBBO – was actually quite easy to put together, even if my result wasn’t entirely even. I have seen The Hairy Bakers make Battenberg cake in a dedicated specialist tin with metal strips dividing the pan. Although I am not really one who needs much convincing when it comes to buying single use kitchen appliances and accessories, I mentally drew the line at a Battenberg cake tin. I do not like Battenberg cake very much and only made it for this baking challenge. Fortunately, Mary Berry is made of sterner stuff and provides instructions in her recipe for constructing your own cake divider out of baking paper. She says baking paper, but I think that you will need some foil-lined baking paper to create a sturdier divider, just as they used on the show (you can buy it at Lakeland, as noted below, which also appears to stock half the show just based on a brief glance at the GBBO set and Lakeland shelves). Presumably Mary recommended plain old baking paper as it’s easier to get hold of. 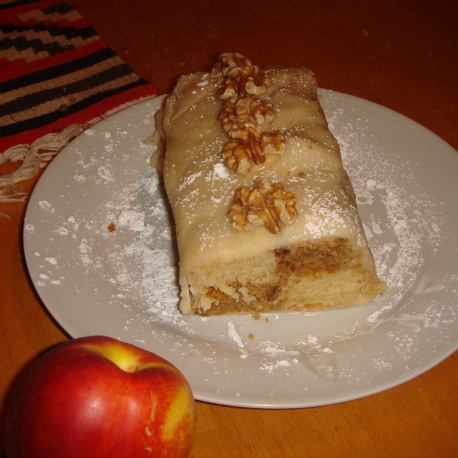 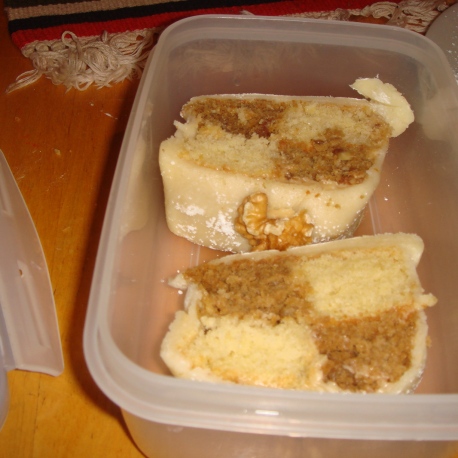 All packed up for work

Despite the need to construct things with baking paper and string (I didn’t bother with the string. String? Do people keep that around? I may be adult enough to wipe up spills, recycle empty wine bottles and keep a little stash of rubber bands in my cabinets…but not enough to hoard kitchen string. Sorry Mary).

Incidentally, I thought I’d mention my favourite GBBO round-ups from the Internet. GBBO, by its nature genteel, charming and likeable – with equally likeable ‘characters’ whose loveliness is often approvingly contrasted to contestants on The Apprentice – with fairly low stakes (I mean, we are talking baked goods rather than heart surgery, and winning a trophy and a bunch of flowers) lends itself to some pretty funny, good-humoured writing. The dramatic incidental music and editing also leads to wry commentary, as does Paul Hollywood’s oft over-the-top judging. Some of the funniest writing on the GBBO has come from forums and blogs.

Most of the main newspapers do round-ups/summaries/recaps/what-have-yous of the GBBO, but I like The Guardian’s the best: funny, affectionate, and lacking the occasional sneering that some recaps from other newspapers have featured (not mentioning any names, of course…). The Guardian’s blog reads like it was written by someone who actually likes the show, whereas some of the others seem to be written by people who disdain it rather.

I really enjoy the episode summaries from Stuck in a Book, which is primarily a literature/book-y blog. The writer started rounding up series three quite late in the series, showcasing a love for Sarah Jane, the vicar’s wife, and Cathryn ‘Oh-my-giddy-aunt’ Dresser, but it was worth the wait, and series four has been recapped. A blogging break was recently announced but there are plenty of episodes to catch up on. A favourite feature is the Official Andrex Puppy Most Adorable Mary Berry Moments.

A devastating though sadly short and one-off description of GBBO is available on a forum. Although only a paragraph, it’s a description that I have come back to time and time again. Paul Hollywood described as “a chubby bloke with a beard […] with a mafia-like ‘Do I amuse you’ stance” pops into my head every time they zoom in on him chewing. I can’t even read this out to my boyfriend because I laugh so much.

END_OF_DOCUMENT_TOKEN_TO_BE_REPLACED

If you haven’t yet read Wolf Hall or Bring up the Bodies, could I recommend it? I just finished the latter and feel shivery and sad, obviously two emotions everyone should feel regularly. I’m so glad that the head of state can’t summarily execute people anymore where I live.

I’m on to the first of the challenges for series two of my ‘bake my way through the Great British Bake-Off challenges’ challenge! Very excited to have crossed this Rubicon (not this one – not big on mango). (Note from my personal musical history: I first heard the phrase ‘Cross[ing] the Rubicon’ in this song by Aimee Mann.

As always, the first episode of the series was cake week. The signature challenge was to bake 24 cupcakes with the sponge and icing in different, yet complementary, flavours (up to two varieties – I only made one). Looking over the challenges for series two in my notebook, I note several patterns: one, the introduction of stipulations on quantities in almost all challenges, and the requirement that various elements of the bake be in ‘different’ flavours, indicating that they were eagerly scouring out those with a talent for combining flavours in unusual ways. The second series of the show was much more polished than the first; for example, Mary and Paul used to wander round the tent during the technical bakes in the first series, but the judging really was ‘blind’ from the second series onward. When re-watching the episodes a while ago (when they were on the iPlayer) so entrenched had the technical challenge as ‘judged blind’ become in my head that I was really shocked by this! 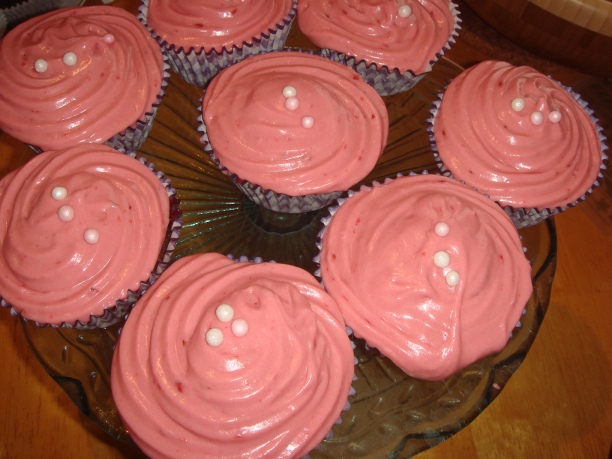 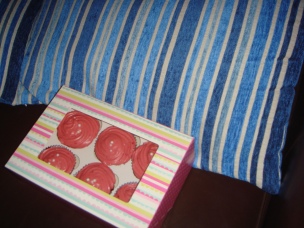 All packed up for a journey to Wiltshire

Anyway, creative cuppety cakes. One of the limitations I face when making the challenge is that I want the things I make to be pleasing to people around me, and also eaten by them, so while I had lots of ideas for lime and mint cupcakes and similar, I thought they wouldn’t be particularly appealing to the people I was serving them to (boyfriend and his two siblings), and I didn’t want to be responsible for eating lots of cake myself, so I chose a relatively classic, even safe, combination, that of chocolate and raspberry. Unusually for me (!) I made a ‘normal’ buttercream, that is, just butter and icing sugar, rather than attempting a Swiss meringue. This was because I thought the raspberries would add too much extra liquid for the Swiss meringue buttercream to take, but excess moisture is easier to adjust in a standard buttercream. I didn’t like the texture as much as a Swiss meringue buttercream, though it was nice enough if I pretended to forget how much sugar went into it. I used quite a bit of the raspberry coulis, which made the frosting quite soft and spreading: it only held its piped lines for a few hours. I do think the addition of raspberry extract or liqueur is necessary for a punch of flavour.

The recipe I made was based on a cupcake recipe from the blog Annie’s Eats, and it states that she couldn’t remember how many cupcakes the batch of batter yielded, but it was probably around sixteen with a little left over. I therefore erred on the side of caution and made the cakes in shallow, small bun trays rather than larger American-sized cupcake tins, and I just about managed to eke out 24 as per the dictates of the challenge. More likely you will get 16-18.

END_OF_DOCUMENT_TOKEN_TO_BE_REPLACED

I am a fan of wholesome BBC baking show The Great British Bake Off, truly one of the highlights of my summer (and, since I tend to watch it on catch-up, autumn, too). In fact, I was slightly resentful of the Olympics for eating into my GBBO TV time (I think the bake-off started slightly later to take the Olympics into account). While watching the third season – which definitely featured some of my favourite characters (it was shocking to realise that James’ jumpers have numerous enthusiastic fans and not just, er, me), I idly thought that it would be afun project to bake all the challenges of the Great British Bake Off – seasons one, two, and three. And so here I am today.

Well, not quite. The bakers have a couple of hours (usually three to five) to do each challenge, and they bake three recipes over a weekend. I’m not participating in the bake-off and I don’t have that kind of time, or capacity to eat that much baked goodness in one sitting, even. So my challenges will be more spread out, and though they won’t have the ticking-clock factor of the show, they will have the ticking-clock factor of my life.

Looking over the challenges from the last three seasons, what I’m most struck by is the evolution of the show, from challenges that were simple and sweet and what a regular, good home-baker would have in their repertoire (a signature cake) to more complex creations that I can’t imagine the average home baker makes regularly – such as hidden design cakes. However, that’s for season three – I have dozens of recipes to get to before attempting that! I suppose in a way that evolution will be useful for me – I can practise and perhaps veen improve. And I do like a project.

For anyone not familiar with the show, each episode is themed around a certain baked or dough-based good (cake, biscuits, choux pastry, etc). Bakers make three recipes: one, a signature bake, to showcase their personality (or to reflect a dish they regularly make – again, as requirements became more creative, this early requirement fell by the wayside a bit); second, a technical bake, where each baker makes the same recipe and they are judged against one another; and finally a showstopper bake. The showstopper should, as the name implies, be a celebratory showpiece. Hmm. We’ll see.

So we start with this very simple challenge from the very first episode of the very first season of the Great British Bake-Off, the signature cake. A cake the bakers made regularly, a recipe close to heart, hearth, and home. All right then.