When I was a child, summer holidays were spent catching up with family in Belgium. Some of my most relished moments were the evenings spent at a local kermis (funfair), where I’d ride on shiny plastic horses on the carousel, or we might have a go on the bumper cars as a family. I liked being paired with my dad because he properly embraced the spirit of terrorising fellow drivers on the electric floor, driving very fast and crashing into friends and hapless strangers very hard. Between rides we’d eat the usual fairground food: a box of fries doused in mayonnaise, and for afters, a puntzak (paper cone) of smoutebollen, simple doughnuts made of a plain, deep-fried batter, coated in a powdery layer of icing sugar so thick you could see teeth-marks in it. Smout means ‘lard’ in Dutch, referring to the fat the batter was traditionally fried in; in the Netherlands, similar doughnuts are called oliebollen. I’ve never heard them called that in Belgium, though.

Aside from these seasonal treats, I don’t remember doughnuts being a fixture of my childhood. That’s probably all for the best, in the long run. 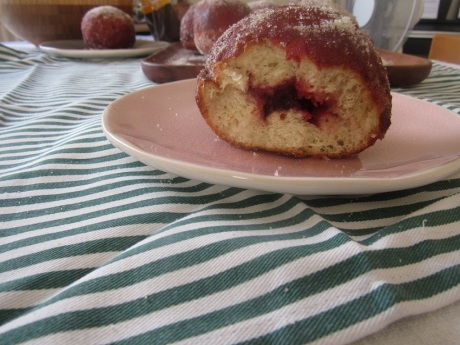 If I picture a doughnut, what comes to mind is one of those glazed American-style ring ‘donuts’, glossy with a chocolate-flavoured or pink icing and scattered with sprinkles. I didn’t know that traditional British doughnuts were round, sugar-dusted, and filled with jam until I was in my late teens. The doughnuts made for this recipe are this old-fashioned kind, sticky with jam and the caster sugar which coats them – and your lips – with sparkling shards. They are delicious – at their absolute best fresh, but they keep well for a few days. It turned out, too, that they resonated deeply with my British friends, who commented with delight on my obligatory Facebook photo. I hadn’t known people loved doughnuts so much. They are truly the original way to make friends and influence people.

Final observations: I used a deep-fat fryer for these because I was much too anxious to risk frying in a pot of oil on my gas stove. Please be careful making these, whatever method you choose. Also, deep-frying in summer is hot and difficult. Make these for people you really love who will be truly grateful.

Recipe below the jump, as ever.

This post is part of my challenge to bake my way through all the challenges of the Great British Bake Off. The challenge below is the technical challenge for week seven (sweet dough week) of series three: ten jam doughnuts.

Notes: the recipe calls for two jars of jam, but I used one and this was fine – my boyfriend actually said he liked that the jam didn’t squirt out when you took a bite. If you want very filled doughnuts, use the full two jars.

In spite of the instructions to use a strained jam, I used a thick, low-sugar, extra-fruit strawberry jam, because I thought the doughnuts would be sweet and rich enough. I was correct, but the thick-textured jam rich with whole berries, was much more difficult to pipe. I didn’t mind, but if you want an easier life, go for a very smooth, strained jam.

The recipe makes ten doughnuts – ten very large doughnuts. If you want more manageably-sized ones, try making 15 or even 20 small, bite-sized ones.