This post is part of my personal challenge to bake my way through all the challenges of the Great British Bake Off. The challenge below is the signature challenge for week three (tart week) of series three: tarte Tatin. 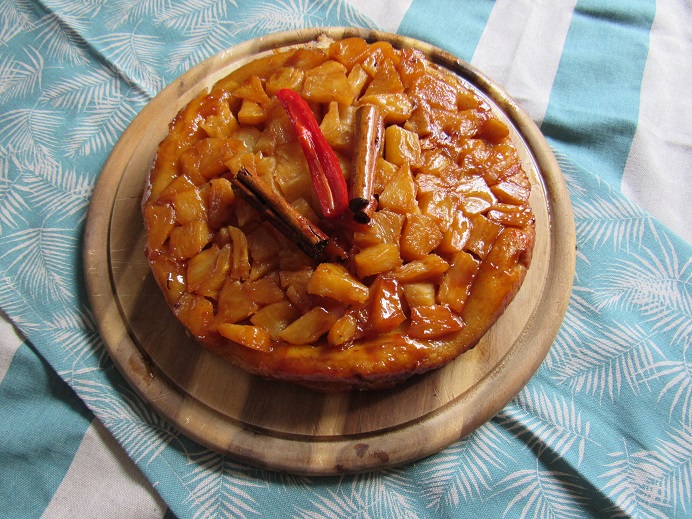 I have very fond memories of making my father a classic apple tarte Tatin – at his request – from Linda Collister’s reliable and good The Baking Book when I visited him in Dubai as a teenager. It was a bit of a struggle in some respects – I cooked the apples and caramel in a standard baking tin on the glass stove-top rather than in an ovenproof frying pan, and lacking a scale I had to approximate the amount of butter used in the pastry by eye. The result was more like shortbread than shortcrust, but it was, as you might expect, utterly delicious against the fragrant, caramel apples, and my father very kindly gave me his copy of The Baking Book which so entranced me all of that summer. Linda Collister is still one of my go-to cookery writers and The Baking Book my first port of call when looking for a baking recipe. This book is no longer in print (though you can regularly find used copies via online retailers, and it’s well worth seeking out), but fittingly enough Collister is actually the author behind the Great British Bake-Off branded cookbooks (they do include handfuls of recipes from the contestants and judges, but the majority are Collister’s – and I think she should get more recognition for this than she does).

According to the stipulations of The Great British Bake-Off challenge, the tarte Tatin could be sweet or savoury, but contestants were instructed to use rough-puff pastry. I thought this was quite interesting; most recipes guide the cook towards using store-bought puff pastry, but of course rough puff is not something you can commonly buy. I don’t know how regularly it’s used in professional kitchens: at a party, my friend Juliet’s boyfriend, who is a trained chef (Cordon Bleu, bien sûr), told me they hadn’t been instructed on this pastry. ‘Rough puff’ certainly sounds a bit amateurish, but you can style it out by calling it ‘pâte demi-feuilletée’.

(Another interesting thing about tarte Tatin is that – despite being named for its inventors, the sisters Tatin, it seems perfectly acceptable to write the ‘tatin’ in lowercase).

Despite my happy memories of the classic tarte Tatin, I opted to make something a bit different. My first attempt was a pear tarte Tatin, using Collister’s recipe as a guide. Unfortunately it didn’t work with the pears: juicy as they were, I couldn’t cook out sufficient liquid, and the resultant caramel was extremely thin and overwhelmed the somewhat delicate rough puff pastry, resulting in pear-caramel-soaked layers (yes, delicious). I did intend to try it again and perfect the pear Tatin but, as so often happens, I became first distracted and then obsessed by the idea of a chilli-spiced salted caramel pineapple upside-down cake. From there it’s a short walk to a pineapple tarte tatin.

The juiciness of the pineapple pieces is retained even after cooking into caramel sauce and baking, and their intense, tropical sweetness contrasts beautifully with the slightly salted caramel. The idea of adding salt and chilli to the pineapple was inspired by the typically Malay way of eating it with these additions. I grew up in Singapore and there’s truly nothing like eating a pineapple that has ripened in the sun to honeyed perfection, cool from the fridge, sprinkled with salt, sticky juice running down your face and arms and chest, under a humid sky. In Singapore we grew tiny, perfectly round, pink-skinned pineapples in our enormous garden for many years. It seemed so normal. Of course in the UK you can really only get your hands on the large, oval pineapples whose skin is yellow when ripe but is typically sold hard and green, straight off the plane from Costa Rica. They can still be delicious when the craving hits, but they are undeniably a little monotonous in taste and fibrous in texture.

A lot of recipes calling for pineapple will used tinned chunks. I used fresh, but I honestly don’t think that it makes a huge amount of difference after cooking. If buying fresh pineapples, you will have to buy them in advance and coax them into ripeness (not to mention the peeling and winkling out of the eyes); if using tinned, ensure you have drained the chunks thoroughly of their juice.

The pastry recipe is a scaled-down version of the recipe from the master of patisserie, Michel Roux Senior, a man whose very rare appearances on television utterly captivate and charm me.

The full recipe is below the jump.

Note: I’ve given a weight for the prepared pineapple, but the amount you use will depend somewhat on the size and depth of the oven-proof pan you are using at the start.

You will need an oven-proof pan that you can also use on the stovetop for this recipe. I use a 21cm cast iron skillet which I love deeply and have seasoned to nonstick over many years of tender care.

For the pastry
Method and proportions from Pastry: Savoury and Sweet by Michel Roux

For the caramelised pineapple

To assemble and bake