I went to the gym yesterday, for the first time in…a while. I’ve been busy, and sick, and social, and taking a French course, all of which has disrupted my usual gym-going routine, which was pretty settled and well-established. Once dropped, I felt too intimidated and apprehensive to go back, even though I knew that the tension in my shoulders and recent difficulty sleeping could have been resolved with some exercise.

Well, I finally managed to get to gym, albeit much later in the evening than I planned and on the strength of two glasses of wine from a work function (oh yes), and I’m pretty much back to square one in terms of fitness, which is pretty annoying. However, once finished, I did feel better, more focused, my thoughts less troubling, and I slept well. Having exercised, I also let myself indulge in one of my plum friands, serving it up with a trickle of double cream. 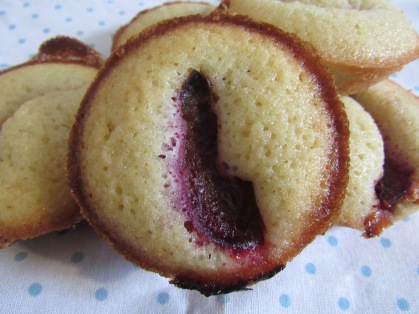 Friands are egg white and ground almond-based mini cakes, oddly popular in Australia, and very similar to French financiers. Friands tend to be baked in round shapes, unlike rectangular financiers, whose shape is said to resemble gold bars; for financiers, the butter is typically browned until it picks up toasted hazelnut notes; and friands typically have additions and flavourings such as chocolate, coconut, and fruit, whereas the financier is unadulterated almond. These differences aside, both recipes involve ground almonds, icing sugar, melted butter, and egg whites, so I think it’s safe to say they are related in some ways, cousins at least even if they’re not close enough to be siblings.

I made this recipe to use up the last three plums in the house – conveniently, that’s all that was needed. It also helped me finish off my stash of ground almonds, which had grown to ludicrous proportions thanks to a brief macaron phase; and there were egg whites in the freezer compartment (they just about fit) which just needed a brief thawing. So this recipe was serendipitous in some respects.

I did make two tiny tweaks to the recipe as printed by Waitrose Weekend, a free newspaper distributed in Waitrose supermarkets. Firstly, I did not line the bottoms of the muffin tin with circles of baking paper, because the idea of cutting them out made me feel deflated. Instead, I greased the bun tin thoroughly – and I mean thoroughly – with melted butter, let the friands cool for a good while, and then eased them very gently out of the tin with a flexible palette knife when they were barely warm (I think if you let them cool to absolutely cold the plums might adhere). You do need to be careful when doing this because the plums can stick to the tins and cause the cake to break when prised out of the tin, but I genuinely think it’s a million times better than cutting out baking paper circles. But to each their own. Secondly, I replaced the called-for almond extract with vanilla extract, because I was serving them to a friend who doesn’t like the pronounced, cloying bitter-kernel taste of almond extract (although she likes almonds). In fact, I think the vanilla extract was a good choice as it brought out the soft, buttery tenderness of the cakes rather than highlighting the almond.

Recipe after the jump.

Plum and almond friands
Recipe, marginally tweaked as above, from Waitrose Weekend

Note: a top tip on egg whites, particularly helpful if you freeze them in quantities, is that a medium egg white is about two standard 15ml tablespoons