Some time ago my friend Ariadne and I had one of the most middle class nights on the lash you can imagine, by which I mean we drank cocktails in Soho until I reeled and then, instead of piling into a greasy, garishly coloured meat palace for a late night kebab, we stumbled (literally in my case) into Cutter and Squidge on Brewer Street for some sweet pick-me-ups. 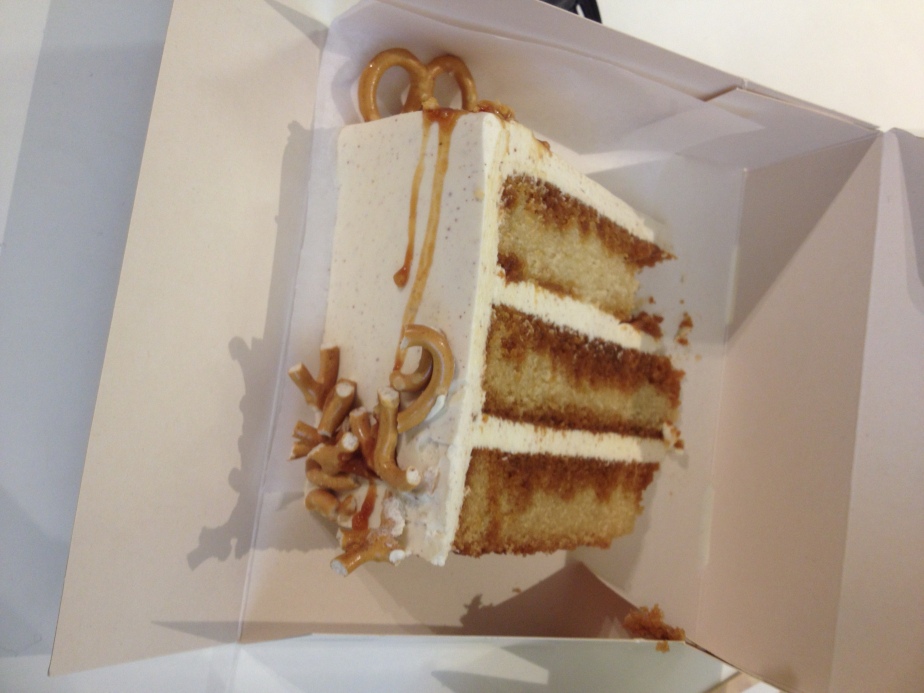 I had heard of Cutter and Squidge before, and knew their bakery USP is their ‘biskies’, which they describe as a ‘unique, handmade sandwiched dessert’ and I call a sandwich cookie. So was I keen to try one. My lovely, much-less-drunk-than-I friend (I had in fairness drunk up most of her Negroni when she took a sip and said “It’s really bitter.” “Yeah…it’s a Negroni, dude,” I slurred, halfway through my Breakfast Sour already, to which she responded, “Umm…I thought that meant a sweet cocktail.”) and I dithered for a while in front of the display of ‘biskies’ before deciding that the Salted Caramel S’more was the only way to go. We also knew that we had to order a slice of cake to share as well because RULES, so we moved on from dithering over biskies to dithering over cake. We were clearly onto a kind of theme because we chose a wodge of the Peanut Caramel Pretzel cake, agreeing that to the marriage of salty and sweet we must admit no impediment. Note: the portions of cake are generous.

We parked ourselves in the corner of the bakery and proceeded to rip open the packaging to try our (almost) midnight treats. Sadly, we were both underwhelmed by both the bisky and the cake, which was a shame. I have read so much praise for this bakery, and the story behind it is sweet (it’s founded by two sisters) that I’d expected to absolutely love it.

The bisky was all right: the base (and top) is a slightly soft-textured cookie, which the bakery refers to as a ‘cookie-cake’ hybrid but reminds me of slightly spongey whoopie pie shells (despite their protests to the contrary on their website!), or cakey snickerdoodles. It was dabbed within with salted caramel buttercream, which was really light-textured, which is Cutter and Squidge’s signature approach to buttercream. As so many buttercreams are, to my taste, overly cloying and heavy, sometimes even (gasp!) grainy, I did appreciate this. The gelatine-free salted caramel marshmallow had a hint of brown sugar and a floral depth that testified to good-quality ingredients; the texture was denser and stickier than the jet-puffed supermarket versions. There was also a slathering of salted caramel sauce topping off the fillings. But overall, I confess, it was not particularly distinguished. I am a pretty experienced caramel-maker and I bring my caramel so close to the brink of being burnt that it takes on a powerful, smokey complexity, a bitterness than belies the mass of sugar used to create it. Very few commercially-made recipes containing caramel will do this – I am very aware that my personal preference for caramel might be too dark for many – and consequently I always find them very sweet, unchallenging, and undistinguished. Overwhelmingly the impression was of a uniform sweetness applied over a variety of textures, and the promised ‘salt’ part of the caramel didn’t particularly materialise for me. Because the bisky was billed as a S’more, I would have expected, also, a toasted element, which was lacking. 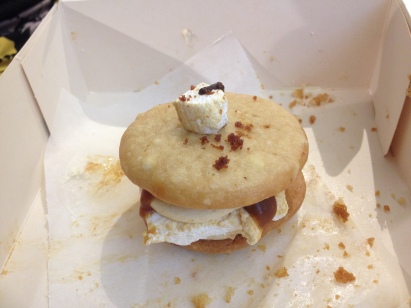 The Peanut, Caramel and Pretzel cake suffered similarly from sweetness and surprising blandness. The texture of the cake was lovely – soft, fluffy – and the buttercream texture was, as before, light and entirely suited to my taste. But the peanut butter buttercream tasted on the whole sweet and slightly bland, carrying too little peanut flavour, and the most memorable part of the whole thing was the commercial pretzels on the side. Kind of a shame, and I was surprised to come to this conclusion. The cake is damn beautiful to look at, though. Apparently the mission of Cutter and Squidge’s founders is to make cake cool, and visually their baked goods are entirely enticing.

But Cutter and Squidge is not the only place we have frequented in search of a late night sugar rush. We have also visited Gelupo, the gelato-focused offshoot of Jacob Kenedy’s regional Italian restaurant, Bocca di Lupo. The only thing I have ever eaten at Bocca di Lupo is a sweetened coffee dessert in 2012, which was delicious and memorable all these years later; Gelupo has been on my list for pretty much as long. I had a ricotta, coffee and honey gelato, and Ariadne had a flavour referred to, elusively, as Crema 101.

I expected my gelato to be slightly sweeter and creamier than a standard, straight-up coffee gelato, and indeed it was. I couldn’t particularly pick out the ricotta and honey flavours, exactly, despite the recipe apparently using the powerhouse that is chestnut honey (the ‘castagno‘ sold by From Field and Flower at Borough Market is markedly, distinctively bitter and smokey – just the way I cook my caramel, in fact!). The gelato overall was mellow and milky; a comforting flat white rather than a bitter and punchy espresso. The texture was soft and delicate, which complemented the flavours. Overall, there was nothing wrong with this gelato, but it wasn’t to my personal preference, which, I discovered with each bite, is for a very singular, robust and pure flavour carried through the medium of cream or milk. The coffee flavour was too diluted for me, and I prefer the ever-so-slightly firmer set of gelato I’ve eaten in Corsica and Croatia (I have been to Italy. I just didn’t eat gelato there). In actual fact, my very favourite iced dessert texture is the slightly chewiness of Turkish ice cream, which contains gum mastic, making it stretchy. It’s very unusual and recommended, if you can find it. 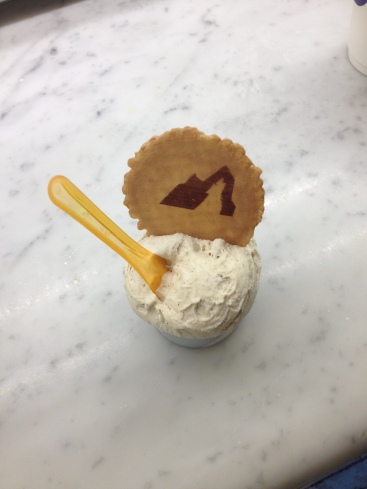 The ‘Crema 101’ was a very pure, creamy flavour, like a sweetened, cold, rich milk. There was something simultaneously nostalgic about it – recalling a memory of drinking unhomogenised gold-top milk straight from the fridge in Belgium (God knows where my mother found it) –  and yet it also being very plain and, if I’m honest, a little dull. It’s the kind of thing that might come to life set against, say, a syrupy slick of ripe red strawberries diced and macerated with a teaspoon of sugar and a drop of balsamic vinegar, but on its own fails to sing.

2 thoughts on “London Bites: late-night desserts at Gelupo and Cutter and Squidge”