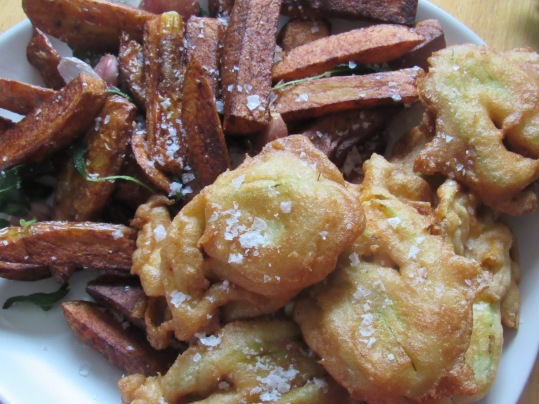 It was not too long ago, although it seems a political lifetime away, that my boyfriend and I settled in front of the TV to watch the ITV EU referendum debate, accompanied by platefuls of crispy, deep-fried goodness. There has been plenty to keep anyone glued to the television lately: Brexit and Trump for the politically inclined; Euro 2016 for the sport-inclined (it’s football or something); and the final episodes of the latest series of Game of Thrones. I’m going to  admit that of this list I paid keenest attention to the EU membership referendum debates. Now that the referendum has passed, those politically inclined can continue watching Trump, the dissolution of the Labour shadow cabinet, and post-Brexit negotiations. Those disappointed by England’s defeat in the Euros could always switch their support over to Iceland, who are in their first major international tournament, or my own team, the Red Devils (not Manchester United…this totally confused my boyfriend when I first told him “I only really support the Red Devils”.) Or, you know, tennis, since Wimbledon began, although you could have missed the news, drowned out as it has been by politics, which has been in a state of what you might call ‘flux’. And if you watch Game of Thrones, well, I know less about that than I do about football.

Whatever takes your fancy, you may wish to eat while watching. There is something that feels so decadent eating off a tray on the sofa as an adult, especially when things are eaten with fingers, even more so when you have allowed yourself not the low-fat hummus and crudites but the good stuff, the actually fried stuff: onion rings, calamari, whitebait, aubergine tempura, fried chicken, Scotch eggs, even the humble crisp, all have benefitted by being submerged in hot oil until their water has evaporated and they have returned from this slightly dangerous baptism crisp-skinned and tinged with gold. While there is nothing wrong with a torn-open bag of Doritos’ finest (Cool Ranch if you know I’m coming over, please), if you want to up your game a bit, or perhaps combine a love of deep-fried food with seasonal eating, may I recommend the fried and battered courgette flower?

All right, so that possibly sounds like the most pretentious sentence ever written, but I bought some of these flowers, prevalent in spring and summer during courgette/zucchini growing time, stuffed it with cheese (and anchovy – I would characterise this as optional), battered it and fried it, as per Tessa Kiros’ recipe in her elegant Falling Cloudberries (her writing is lyrical, at times a little purple, but hugely evocative of mood, place, memory). The flower itself had a delicate, slightly milky freshness, the petal both tender and yet robust enough to chew; the batter crunched under my teeth; the mozzarella oozed in long and delectable melted strands. There is nothing exclusive about this kind of textural and taste pleasure. The only problem will, of course, be getting hold of the flowers themselves. In London, this may be, at most, a hassle rather than impossible: Wild Country Organics sells them at various farmers’ markets and Borough Market, as well as online. You can buy courgette flowers online via Farm Direct, Natoora and other specialist food sellers. They are not the absolute cheapest things to buy – they are seasonal and delicate so must be harvested and transported with care. For the recipe below you will need about two, maybe three, total, flowers per person, depending what you are serving them with, so if you want to try this but are also cost-conscious, this is the perfect dish to serve up for just you, or perhaps you and your partner or a close friend. The mozzarella and batter makes the tender blooms surprisingly filling. They are scattered with a final flutter of battered and fried sage leaves.

Nigella Lawson‘s Tuscan fries, from her book and show Nigellissima, which focused on Italian food Anglicised, or perhaps Nigella-ified, is perhaps, if not quite the opposite of the fried courgette flowers, an easy introduction to deep-frying; deep-frying for the cautious. The method is unorthodox: you fry chunks of potato, starting in cold oil, adding aromatics such as unpeeled garlic and herbs at the end. I used sage, because sage was called for in the battered courgette blossom recipe and I wanted to use up the packet: the fried herbs are perfectly crisp and dry at the end, crunchy and paper-thin and shattering delectably against the tongue. I actually much preferred these naked leaves to their battered cousins. Rosemary would also be very good here.

Frying the chips in cold oil, Nigella assures us, does not leave them greasy or soggy. I think mine browned a little too much – I should have turned the heat down a little – and they were slightly limp in the middle (they could have been cut a smidge finer, and I think I used the wrong variety of potato – see my notes below), but indeed they were no greasier or oilier than chips cooked in the more traditional two-part method. While you definitely, certainly, should not ever ever ever leave boiling oil unattended in the kitchen, you can certainly potter around the kitchen and prepare other parts of the meal when cooking the chips using this method, keeping the occasional close eye on them. I did let the oil used for frying cool and then strained and saved it for possible further use.

I wouldn’t advocate this meal for every night (masses of oil + TV means your hips, stomach, waistline and bum won’t lie) but, with a cool glass of prosecco, it’s the perfect, slightly classy-but-still-fried accompaniment to the political TV/sporting event/brutally bloody Middle Ages themed TV show your heart could desire watching.

Notes: The recipe calls for waxy potatoes but then specifies Maris Piper; these are floury, although they are also all-rounders so can be used here. There is a similarly named waxy variety called ‘Maris Peer’ but I can’t confess to ever having seen them in the shops.

Notes: I cooked these in a large, wide, deep cast-iron frying pan.

The recipe specifies using anchovies. I have marked them optional for two reasons: omitting them makes this vegetarian-friendly, and two, the fishiness of the anchovies is more pronounced in this recipe than it is in others, and I didn’t find the taste particularly welcome. If you think you or your guests might feel the same way, just leave it out.

The recipe is quite easy to scale up or down: you will need a chunk of mozzarella cheese and half an anchovy, if using, per flower. I haven’t scaled the batter recipe up or down; the ingredients are not expensive in the quantities used, and if you really have too much, you could batter other things.

Step One of the recipe calls for opening up the flowers and removal of the inner stamens. I am sure there is good reason for this but there was barely the smallest stub of a stamen in my flowers and all I managed to do was tear a few petals. For this reason I’d consider this step optional – open up your flowers and check before rootling inside their delicate cavities.