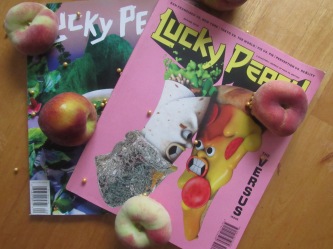 While I was in New York earlier this month, I visited three outposts of David Chang’s Momofuku empire. The Ssam Bar and Noodle Bar offered up some out-of-this-world spectacular food, the find of food I’m still thinking of. (I also visited the Milk Bar, if you’re wondering about the third outlet). I would love to go again and would recommend them heartily to anyone (apart from vegetarians – no real non-meat/fish options are available. It seems kind of out of step with current sensibilities but hasn’t affected their success). Anyway, considering I fell pretty hard for the slurpy, spicy, punchy food offered at Momofuku, I also picked up two copies of Lucky Peach, the food journal David Chang founded: the Pho Issue and the Versus Issue.

Unlike other food magazines, it’s quarterly rather than monthly and is decidedly a journal of food writing rather than a small recipe compendium smattered with writing, reviews and other features. Clearly comparing Lucky Peach to Olive, Delicious or BBC Good Food would be to compare some quite different beasts. While the latter serves an audience of keen home cooks, Lucky Peach is aimed at true food hobbyists, the kind of people who some might say are unhealthily obsessed with eating. And it is true that for anyone whose interest or passion is food there is a real danger of fetishisation, whether of chefs, produce, or fancy and expensive equipment. Fortunately Lucky Peach‘s editors prick an inclination to pretentious with amusing and perhaps even bold send-ups of the food reviewing genre: in the Pho issue, for example, a writer reviews packets of instant pho and freely admits to them becoming samey and boring and feeling ‘full of noodles’ at the end of the challenge.

The writing is also bloody good. I became surprisingly into the history of pho, even though it was hard work initially considering I’ve like, never eaten it and stuff. But once I let go and got immersed into the writing I learned so many interesting things about not just pho but Vietnam itself: the country’s fraught relationship to America; its transition from imperial outpost to Communist state to capitalist transition; the people who fled and how they built their lives; how all this history has come together in a bowl of beefy noodle soup. Despite living in South East Asia for the better part of my life I’ve never visited Vietnam (nor Cambodia nor Laos for that matter) and Lucky Peach really captured a lot of dimensions and complexity about the country, a particular feat when you consider the whole thing was ostensibly about soup. 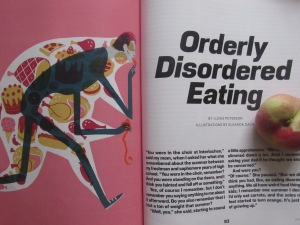 Again, I started off by finding the Versus issue somewhat hard going (the rivalry between San Francisco and New York as food capitals is pretty much alien and irrelevant to me as a rivalry between Marseilles and Avignon would be: I mean, I’d be happy to visit either!), but again a really great selection of energetic writers and compelling interviews drew me in despite my initial scepticism. Lucas Peterson’s article on disordered eating was frankly one of the most affecting pieces I’ve ever read about food, as someone who has suffered from bad cycles of binge eating, self hatred and extreme dietary deprivation (not as an adult, but as an overweight teen). I ached for the loneliness that came through in his eating; by contrast to his patterns of indulge as a teenager, his writing is calm and self-reflective without dipping into self-pity or pathology.

Surprisingly the article on Tokyo by David Chang himself was a weak spot and suffered from one of Lucky Peach’s greatest downfalls, its manufactured bad-assery. I mentioned to my boyfriend when we were eating at the Ssam Bar that David Chang is considered this majorly rebellious, bad-ass, bad-boy, rule-book-tearing chef. “Why’s that?” said the boyfriend, not unreasonably. “On you know, he swears and has tattoos,” I said, and we both laughed because neither are exactly the acts of a wild child dismissive of taboo. 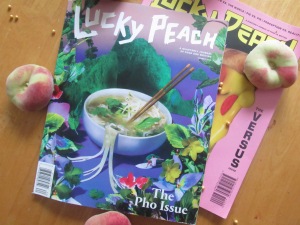 So there’s a lot of swearing in Lucky Peach and Chang’s Tokyo article is one ‘fuck’ after another (of Italy: “For fuck’s sake, can you eat anything besides fucking pasta?” I don’t disagree with the sentiment as such, but it doesn’t actually require the swearing to make its point; it’s there like a Christmas decoration in July, superfluous but the owner likes it, which is fine when it comes to home decor and less fine when it comes to literature and especially the confines of print media). Like we get it, you don’t believe in the norm of being polite to your reader or mindful of their potential delicacy. But swearing isn’t really that original or shocking and frankly is too often used as a crutch in Lucky Peach, a shorthand to show how edgy and alternative the writers and editors are, the expletive delivered in lieu of any real nuance or insight. It’s fundamentally laziness that occasionally mars and, more rarely, threatens to entirely derail an article, which doesn’t do justice to the magazine’s typical depth and grasp of complexity.

All in all, if you see food as more than just fuel and are interested in it as a mechanism and medium for biography, history, geography and even anthropology, I’d recommend having a bite of Lucky Peach (this is the kind of lazy and derivative metaphor which falls into the same category as the swearing I complained about above, but it was surprisingly hard to resist! Sorry guys). It’s definitely one for those whose interest goes beyond cooking as a craft and is not too sensitive to swearing, who has the tolerance to get through some slightly dense articles, the patience to forgive the ones trying too hard to shock (and failing), and can survive long thematic issues on seemingly narrow topics. But perseverance wins the day: if you can make it through, you will discover some truly excellent food writing and experience some real insight into issues you might not have thought about or considered interesting without prompting.