This post is part of my personal challenge to bake my way through all the challenges of the Great British Bake Off. The challenge below is the showstopper challnge for week seven (patisserie week) of series two: a selection of three different types of Danish pastry, all made out of the same dough.

I didn’t think I was the kind of person who made croissants – but I made them! And apple turnovers, and maple-pecan-bacon plaits. All out of a single batch of yeasted, laminated dough. 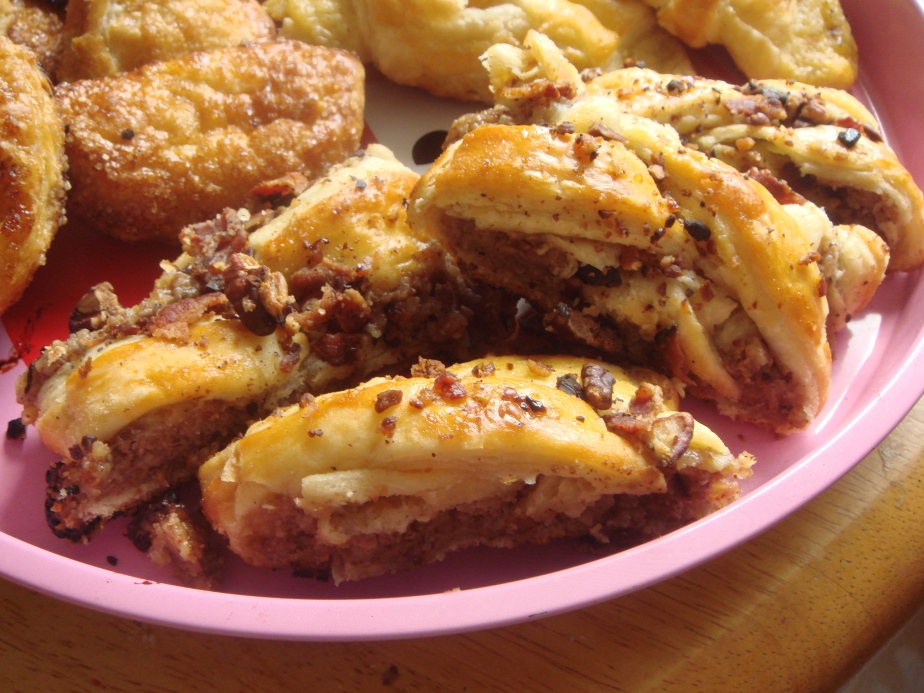 It turns out that the process of making laminated pastry is time-consuming but not hugely difficult or technical. You spend a lot of time waiting for dough to rise, so it’s definitely a weekend project, but actually the dough is extremely forgiving; in the recipe I used, you can leave the dough to rest periodically anywhere between one and eight hours. This is actually extremely flexible and you could fit making the dough around most activities. I used Anna Olson’s recipe for laminated dough, inspired by her show Bake with Anna Olson and the episode on croissants. I mentioned on Twitter that I was making the recipe and Anna actually responded, which sent my heart a-flutter! (Her tip was to take your time – a good tip for me since patience in the kitchen is not necessarily one of my virtues). My only gripe with Bake…as a show is that the recipe measurements are given in cups, whereas I’m certain that as a professional (and very precise) baker, Anna herself would use weight measurements.

I based the filled croissants on the divine Italian-style cornetti I’d enjoyed on a holiday in Croatia a few years ago. My boyfriend and I popped into a local bakery and got some croissants, only to discover, to our delight, that unlike the plain, buttery French-style croissants, these were filled with vanilla-flecked pastry cream (the flavour of the pastry cream can vary). I later discovered that they were in fact Italian, and were cornetti rather than croissants. Apparently the dough is slightly different: cornetti dough is sweeter, more enriched and less laminated, resulting in a softer, sweeter end product. Be that as it may, the ones I had were definitely pretty close to croissant dough and I recreated them as such. Sorry, Italy – but my heart truly belongs to France. My version was quite a bit smaller and less filled than the professional bakery version.

Where it all definitely got a bit more technical was in the shaping of the croissants; there’s definitely a knack to it and my efforts were certainly misshapen. The creme patissiere filling mostly squelched out of the sides – but enough was captured in the centre to make them deliciously gooey and comforting.

The apple turnovers were, as you might imagine, the simplest: make some applesauce. Stamp out rounds of the laminated dough, add a spoonful of applesauce, fold over, egg wash, sprinkle with demerara sugar, bake. Apple turnovers were some of my favourite childhood treats and, although the ones I made were bitesize rather than the palm-sized confections my father would occasionally buy me, they were definitely a step up from the Delifrance.

The maple-pecan-bacon plait, meanwhile, was inspired by one of my favourite pre-diet indulgences from the Tesco/Sainsbury’s/Co-op aisle. (Yes, I know that my penchant for these pastries – which, in their supermarket incarnation, aren’t even all that good – explains why I am currently on a diet). I added the bacon to the standard maple-pecan plait to counterbalance the sweetness – the supermarket versions are extremely sugary – and provide a textural contrast, as well as the intensely salty, savoury counterpoint that makes bacon pancakes drenched in syrup so luscious. The filling also contains cream cheese, which adds another slightly salty, savoury component which prevents the filling from being over-sweet while also adding a lactic creaminess. I made this as one large plait which was cut into smaller portions after baking, though I think, in retrospect, that they would have come out more neatly had I cut them prior to baking.

The plaiting was surprisingly easy to do and the technique could be applied to lots of baked goods . This blog has a detailed pictorial step-by-step guide which I printed out and followed faithfully when making the pastry braid, but I’ve also included some diagrammes and detailed steps, and a link to a video, in the instructions below in case you want to make this recipe or just use the braiding technique to any recipe of your own. The finish is surprisingly professional and will impress your friends and lovers.

While the shaping of the croissants was undeniably difficult, making a plait is pretty breezy. Try it – lots of fun.

The measurements below are a conversion from the cups used to metric, which is why the amount of flour is a little odd!

If you make the pastry cream as below, you will have quite a bit left over, but it was a bit awkward to divide because of the egg yolks. You can use it to fill cakes, cream puffs or a blind-baked tart case. Dot the pastry cream with fresh fruit. Easy!

Bite-sized apple turnovers
The important thing about making applesauce is to use cooking apples. In the UK, this almost always means a Bramley apple: their high water content means they collapse to a completely smooth puree with the application of only a little heat, and their high malic acid content means they retain a tartness that doesn’t disappear after cooking. Other apples can seem quite blandly sweet and insipid after the application of heat. You could also use Granny Smith apples, although they have a tendency to caramelise (and then burn), so I prefer adding a few tablespoons of water to the apples as they cook.

Applesauce freezes well and you could easily make a large batch and tuck it away in the freezer for use in muffins, cakes and as a topping for porridge. I made a smaller amount of applesauce because the pastries I made were pretty small and I needed only a teaspoon of applesauce per pastry.

For the pastries and assembly

You will need a round pastry cutter. Mine was around 5cm, which sounds big, but once folded in half is pretty small.

8 thoughts on “Baking challenge: the one with the maple pecan bacon pastry plait”