I have moved into the penultimate episode of the first series of the Great British Bake-off, and the great thing about Pastry week was the opportunity to make savoury items. Usually, when I’m doing a challenge, I have to make sure I have people coming round to polish off an excess of sweet goods. With this one – although I did serve it up when I had a friend round – it could just be served up for an ordinary dinner. Very convenient.

I actually made up the very same recipe for the signature bake that Ruth Clemens served up. This pastry episode was quite a funny one, both in the amusing and raised-eyebrow sense – Ruth made some comments which were quite controversial in various GBBO online fora (yeah, they exist), and there was some pointed editing going on to imply a Miranda-Ruth rivalry. Still, also served up by Ruth was a really cracking-looking beef pie, which even Paul Hollywood complimented despite being initially sceptical for its lack of sophistication. The recipe I took from The Great British Book of Baking, which I own because of a 2 for £10.00 deal at WH Smith’s (it’s a little disappointing in not having a huge amount of recipes from the show). 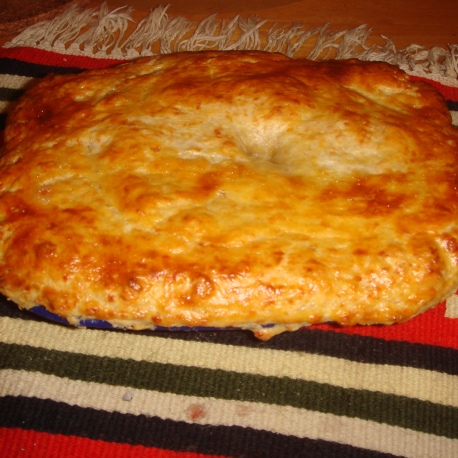 The pie was surprisingly small and I was sceptical that it would actually serve four as stated in the recipe, a point which was agreed upon by my guinea pigs (there were three of us). The verdict was ‘might serve four if two of them are under eight’. I also thought there was a smidgen too much pastry for the recipe, and it was a little thick when I used it all. Although by the end of the suggested baking time the pastry was nicely browned and certainly looked cooked, it was actually a little underbaked in its centre at the bottom and the top, so I’d recommend another couple of minutes in the oven. I couldn’t remove cleanish slices from the pie but can’t remember if that was actually achieved in the show.

Where Ruth used Lancashire cheese, I used mature Cheddar, and I used more liquid than she called for to cook the veg and meat together – maybe my mixture was a little less moist than hers but had I let it bubble away without extra liquid it would have scorched. Altogether, very delicious – my friend recommended serving with gravy and peas, which certainly would have made it go further. Man and child-friendly food, as Ruth notes. Hers was beautifully crimped but I am not as adept at making things look pretty as she is.

Minced beef pie with cheese crust
Ruth Clemens’ recipe (she was a finalist and indeed first runner-up for the first series of the GBBO) in The Great British Book of Baking, but it’s also available online on her website; slightly adapted

You will also need a 20x15cm enamel deep pie dish. I used the exact same one as Ruth (a friend of mine once told me, “You know how some people buy the same clothes as Kate Middleton or whoever? You’re like that, except with kitchen equipment.” It’s true!)