Until this challenge – Mary Berry’s perfect lemon souffle – I had never made a souffle before, ever, nor had I tasted one. I feared it a little – not because of its notorious difficulty, but because I was worried it would taste excessively eggy, something I dislike very much indeed. At the time of writing, however, I have made several (savoury) souffles, all puffy and delicate on top, cheesy and foamy on the bottom. Savoury souffles are not as delicate as they sound, as it turns out: the celestial crown of aerated eggwhite tops a thick, vegetable-rippled bechamel which sticks to the palate.

However, the souffle I made for this baking challenge – the technical challenge of episode four of the first series of the Great British Bake Off, to hastily recap – was definitely dessert, sweet and lemon-flavoured. I made this with a friend while we watched The Time Traveller’s Wife, a sweet enough film that didn’t entirely make sense to me: I didn’t feel it hung properly together, though as my friend pointed out, we were getting up rather frequently to mix batters together.

A trickle of double cream is a good addition 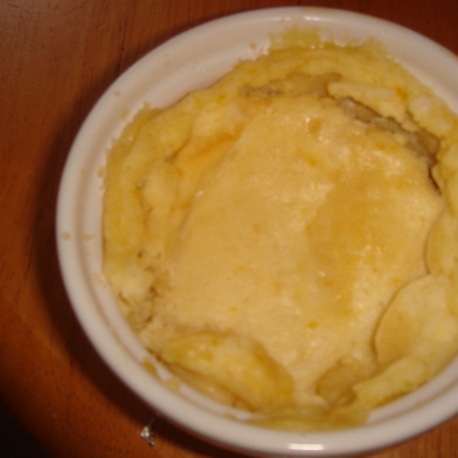 Slightly collapsed, the morning after

My souffles did not rise very high, and I think that the reason was that my ramekins were actually too big (even though I thought they were the standard ramekin size). The recipe specifies filling each ramekin to the brim and then levelling it with a spatula, but if I had done that I would barely have had enough mixture to fill three ramekins. I therefore divided it slightly meagerly between four, so they didn’t rise beyond the top of the ramekin. Nonetheless, very delicious to eat, like the lightest, most delicate sponge cake you could ever dream of making. A good and easy recipe.

Just a note: souffle recipes always specify, slightly hysterically, that they must be served immediately! And it is true that you should do that when serving them warm from the oven, to prevent them from collapsing, albeit in a genteel and almost embarrassed way. However, I always thought this suggested that souffles were actually disgusting beyond that narrow window of puffed-up glory. Not so: saved until the next day, slightly denser, cold, the lemon thick and yet spongey – wonderful. I may have preferred them this way.

One final note: I would recommend blueberries to go with. I didn’t, but regretted it.

Mary Berry’s Lemon Souffle
Not adapted from Mary Berry’s recipe, which is available on the BBC (but some of my own instructions)