Finally I close the second episode’s set of challenges for my baking challenge exercise. The showstopper challenge for biscuit week of season one of the Great British Bake-Off was to create a delectable trio of petit fours, namely meringues, macarons and something choux pastry-based. Because I am a normal person I actually staggered the cooking of these. It was a shame I couldn’t have people round and serve them beautifully together, but…I didn’t. A pity, because I do love the look of those generous piled-up petit four trays. 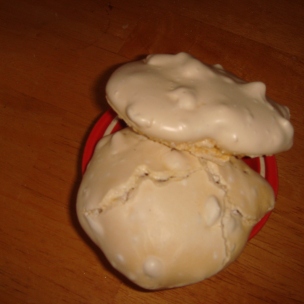 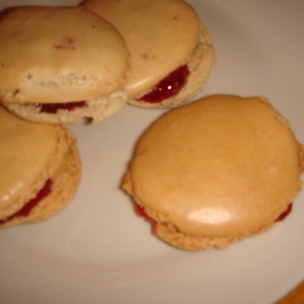 It wasn’t the first time I’d made macarons, but I’m not particularly practised at them and they did not turn out perfectly well. I used the recipe from Ottolenghi and made lime-vanilla macaron ‘shells’, sandwiched with raspberry jam. They were tasty but although the macarons had a perfectly smooth outer shell, they were hollow and stickily raw inside. Because of this I’m going to omit the recipe for macarons: I think it was my inexperience which led to the recipe not working properly, but I can’t guarantee it. Nonetheless, the flavour combination is much recommended – if you have a macaron recipe that’s tried and true, finely grated lime zest and a teaspoon of vanilla paste will be tasty flavour additions.

I’ve made meringues often; the Hungarian recipe I made, from Maida Heatter, was a little different to most recipes in that it called for cooking the egg whites with sugar over a water bath before baking, a la my beloved Swiss meringue buttercream. This made the outside of the meringues firmer and more shiny than most, and they were a little more robust and generally crisp throughout, although there was a hint of sticky gunge at their heart. Studded with walnuts, we nibbled them with fruit – they were particularly good with blueberries. I think Mary and Paul would consider them too big to be true petit fours, though – a fair point, so make little ones if you want truly petit fours.

Finally, choux pastry. I didn’t make a pastry cream confection, but puffy, airy chouquettes. I couldn’t have been more delighted by Rachel Khoo’s recipe. The barely sweet, slightly salty choux was complemented by the sugar topping and dusting of icing sugar, and they were light, delicate and so addictive, with their puffed-out holow centre. Perfect for a teatime treat that won’t weigh you down.

Incidentally, we had a bake sale recently at work (I didn’t participate) and a colleague made CHOUX PASTRY SWANS. God, they were so beautiful. I don’t know who made them but I was awed at their talent. My chouquettes were much more homely.

I suggest serving with berries, and maybe some cream. These keep and store well.