I made Paul Hollywood’s scones for tea-time, and I made them for the Great British Bake-Off series one, episode two technical bake. The chief thing I remember about this episode is Paul’s pride and absolute confidence in his scone recipe, which he’d baked for the Queen. Also, it’s notable, again, how simple the challenges were in the first series: scones are definitely something a competent home baker should know how to make. 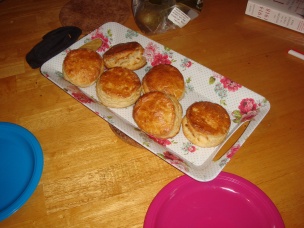 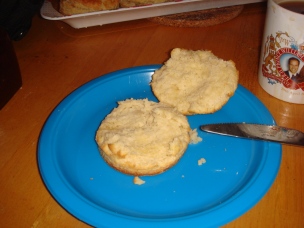 My usual go-to scone recipe is Darina Allen’s, which are soft, fluffy and barely sweet. Darina Allen’s recipe makes a never-ending supply of scones which taste pretty good the next day. Paul’s recipe was simple, despite his calling for a  ‘chaffing’ technique (pretty easy but effective), the scones themselves were pleasantly sweet and they were fluffy and rose high. Sumptuous out of the oven, they were much better fresh than the next day and dried out fairly quickly, so make sure to cover them in an airtight container. A keeper. I suspect that the key to the lovely texture of Paul’s scones is the technique – the chaffing and the relaxing of the dough – so if you have a recipe whose flavour you love I’m sure you could incorporate the method used for Paul’s scones.

Interestingly, Paul’s recipe uses strong white flour, whereas many American ‘biscuit’ recipes (which are more like British scones) use delicate pastry flours. Also, I disobeyed his instructions and did not really leave to cool before piling with (whipped double) cream and strawberry jam.